What is the World Between Worlds? How is it going to bring back Ben Solo? 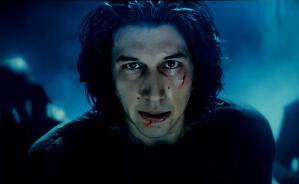 The dyad is a new, mysterious concept in Star Wars. But even still there's so much we can already piece togther about how this "power like life itself" works.

While TROS might not have given us the best delivery, it did follow the overarching goal of the ST: transition canon to exploring the WBW. That's been their plan since launching the Disney-era canon. 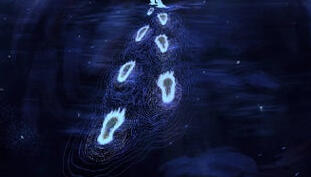 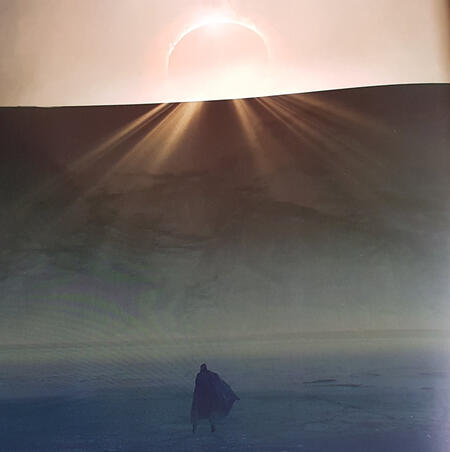 There's been clues and hints spread out around Clone Wars and through the new era canon, all setting up the lore and plot elements for future storytelling.

We still have quite a wait before getting any official confirmation about Ben Solo's fate, but both SW cast members and certain LFL folks have been giving hints since TROS was released. 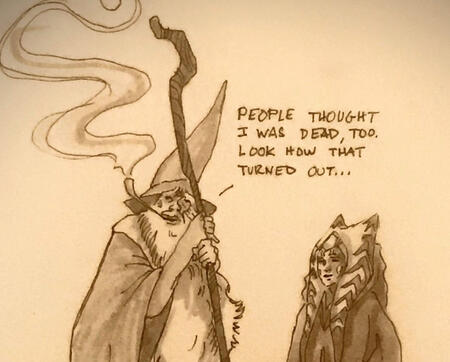 What is the WBW?

As described on Wookiepedia:
The world between worlds, also known as the place between places, Vergence Scatter, and Netherworld of Unbeing, was a mystical plane within the Force serving as a collection of doors and pathways that existed between time and space, linking all moments in time together.
It is also called the “Chain World Theorem” in the TROS visual dictionary.

Excerpt from VD: Ancient Jedi describe a “twisted ribbon lining the perimeter of all reality. Transit to any point across the [galaxy] is made possible by traversing this path through “the Netherwold of Unbeing.”

It is the realm between Realspace and the Netherworld of the Force; between Life and Death
**Netherworld: another realm where souls are thought to go after they die, has both light and dark sides
**Realspace: the Galaxy Far Far Away as we know it.

The Dyad is the living manifestation of the Cosmic World Between Worlds. It is also intrinsically linked to the Mortis realm from Clone Wars.

For More Information on WBW basics, click here
For examples of the WBW across SW canon, click here

How will it save Ben Solo?

This theory poses that Ben entered the World Between Worlds after he saved Rey. He did not go entirely to the Netherworld of the Force because he was not entirely dead, and is now stuck in a limbo world.

How is that possible? How can he get out? Was this always the plan? What does this mean for him and Rey?

All these questions are answered further down in the Carrd.

Welcome to The Pit.

We -- @outletfangirl, @twothatareone, and @princessstarlight -- have been researching the WBW theory since December. We're very excited to spread some hope that Ben can come home.

You can find each of our original master threads by clicking our user names.

In August 2019, at the D23 convention, LFL rolled out a new timeline for all of Star Wars canon. There's a significant gap - 13 ish years - following The Rise of Skywalker.

Because this isn't the end. Rise of Skywalker was the end of the "Skywalker Saga" as we know it: plucky young heroes in a war with clear sides. Where we're going next is much more...cosmic.

In 1976, after ANH and before ESB George Lucas said he wanted to do 12 feature films -- the last three of which were left blank. That was ultimately cut to 9 because it's too large of a task for one person, and then 6 because SW fans sucked the joy out of making the films for him.

Since launching the new Disney-era/Sequel Trilogy era, so much of their original or rebooted content has linked back to the World Between Worlds in some way, shape, or form. There's been hints scattered throughout the new canon, even if the WBW is not at the center of that particular story.

These breadcrumbs have all been leading to this moment, laying down the lore and foreshadowing for this new venture into an expanded Galaxy Far, Far Away.

Rian Johnson's Trilogy: How he set up the WBW for the Sequel Trilogy

Why we hear: May the Force be with you...Always

Theories on why Ben's death (& eventual resurrection) was always the plan:

Three theories on Ben's death: Leia saved him; Dyad or Leia, The Plan

Vergences: What they are & What happened in the Exegol Pit?

Ben's soul faces the Test of the Whills

Inverse Theory: Anakin and Ben's stories are inverted, especially their death scenes, and what it means for the WBW

Matt Martin once said: "I don't think we've seen enough about the dyad to know exactly what it means."

And he's right. This is a brand new concept in Star Wars...kinda.

The clues are all right there in the movies and TV shows. There's so much we can already figure out.

The most important of which: The dyad is the mortal version of the Mortis gods. They're the balance and that's what this has all been about.

Making Rey and Ben a fated pair of soulmates sets the stage for the next phase of cosmic story telling.

What is the dyad? A basic primer

Thread: The dyad, Chosen One, and the Mortis gods

Hyperspace Theory: WBW, lightspeed, and the danger of a broken dyad 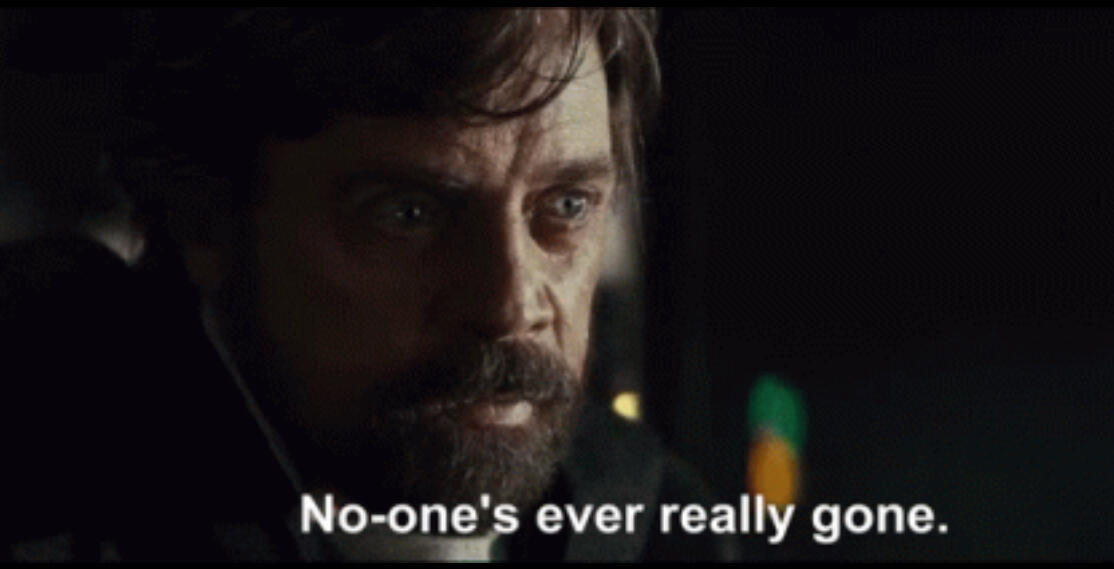 Speculation about Leia saving Ben and the Visual Dictionary's description of a vergence in the pits of Exegol sparked the Ben Solo Lives/WBW theory in the days immediately following TROS' official release. But it was still a dark time. Articles were being released about 'Why Ben Solo had to die' or 'Ben Solo's Death Explained' -- making it seem like a very decided thing, with no closure even in the movie.

But then the first hint came with Dave Filoni tweeting out a Christmas photo of Gandalf and Ahsoka -- two characters that "died" and came back -- looking towards the imaginary audience together. "People thought I was dead, too. Look how that turned out," Dave's Gandalf said.

Dave was also one of the LFL creators being cryptic and lying about Ahsoka's return in the immediate aftermath of her apparent demise during the Rebels Season 2 finale. Before proudly proclaiming with his own 'Ahsoka Lives' T-shirt our favorite non-jedi was back.

There's been plenty of hints since then from other folks on twitter, and a string of suspicious behavior from Adam Driver himself.

The biggest clue, however, is the radio silence around Ben Solo.

No one officially affiliated with TROS or LFL has ever used the words "dead" or "death" when talking about Ben Solo since the movie was released. In fact, his fate is always referred to in vague terms or just ignored altogether. LFL has had plenty of opportunities -- including their own documentary -- to put the nail in Ben's coffin so to speak, and they repeatedly have done the opposite. Meanwhile, they've been outspoken in defending and explaining other controversial decisions in the movie like Leia's death scene, Rey Palpatine, and Rey Skywalker. 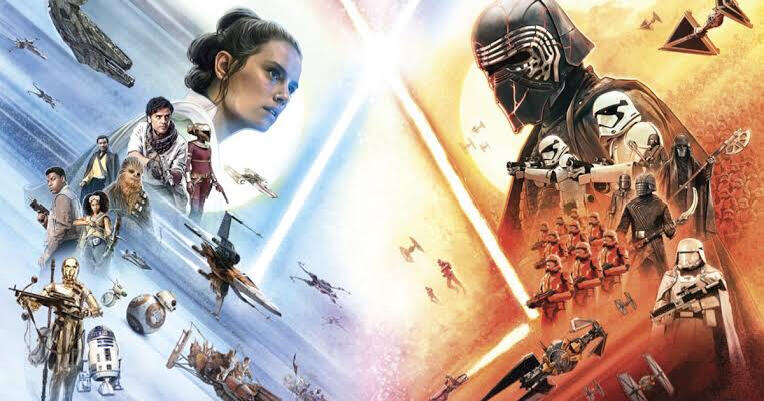 In addition to all the evidence and clues directly explaining the dyad and the WBW (and how it sets up a larger story in the future) there are aleady some hints about what some of those stories might look like and who will be in them.

Here are some of our speculation threads for what kind of stories and which characters could be featured in a WBW-era adventure.

There are also threads with screenshots from both the TROS VD and Novel.

Mustafar theory: Why the lava planet is so important to the Skywalkers

Obi Wan in the Ahch-To mirror

Hints from the Mandalorian: Tython, Butterflies, the Seeing Rock

Time Travel: How Ben saved Leia from the Napkin Bombing

Selections from Duel of the Fates

Additional Sun/Moon Imagery for the Dyad

Selections from the TROS VD

Selections from the TROS Novel